Home › What Does it Mean to Make Amends?

What Does it Mean to Make Amends?

Making amends is one of the most important parts of 12 step programs. So much so, in fact, that there are two steps dedicated to it. But, what does it actually mean to make amends? The Merriam-Webster Dictionary defines amends as “compensation for a loss or injury”. As relates to your addiction, this means compensating those that your addiction has hurt. In order to truly understand this concept, it is important to really understand the steps involved, and how it helps to complete them.

Before starting anything, it is wise to prepare for it. As far as making amends, this where the 8th of the 12 steps comes in. According to Alcoholics Anonymous, the 8th step is, “made a list of all persons we had harmed, and became willing to make amends to them all”. This step involves a number of things, including:

It is important, during this process, that you understand that a simple apology is not enough to undo the damage you have done. Rather, you need to make a more concrete and serious effort to express that you know what wrongs you have done, and that you have changed, and want to make things right. 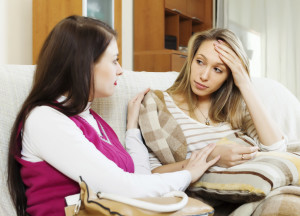 Reconnecting with loved ones is part of making amends.

After preparing to make amends, the next step is to actively make those amends. This where the 9th of the 12 steps comes in. Alcoholics Anonymous states that the 9th step is “made direct amends to such people wherever possible, except when to do so would injure them or others”. There are many different ways to make amends, including:

One of the most important things to remember is that not everyone will be accepting of attempts to make amends. Also, you should never attempt to make amends where doing so is likely to cause further harm, such as making direct amends to someone you injured in a drunk driving accident. Instead, consider becoming an organ donor, or donating to charities that support victims of drunk drivers.

The whole point of making amends is to acknowledge the harm that your addiction has caused, and put it in the past. This way you can move forward with your recovery, without worrying about past action dragging you down. Any 12 step sponsor will tell you that it is easy to get bogged down in the 8th and 9th steps. Remember, however, that you can only do your best to make the appropriate amends to the people you have wronged. Their acceptance or forgiveness is desired, but not necessary. Only your own forgiveness for yourself is absolutely essential for you to continue your recovery. For more information on joining a 12 step recovery program call us at 800-839-1686Who Answers?. We can help.