With alcohol being a permanent fixture in modern-day society, it’s no wonder so many people start out using alcohol on a casual basis. For some, this casual indulgence can evolve into a full-blown addiction problem when left unattended.

In cases where a person struggles with bouts of depression or anxiety, the tendency to engage in alcohol abuse rises considerably. According to the Georgia Department of Human Services, an estimated 37 percent of alcoholics struggle with a co-occurring psychological disorders.

The Relationship Between Alcohol and Depression

As an occasional indulgence, alcohol offers a quick, accessible means to elevate one’s mood and loosen up. When consumed in excess amounts alcohol produces the near opposite effect, leaving a person depressed, fatigued and irritable once withdrawal takes hold. In turn, uncomfortable withdrawal effects often drive frequent drinkers to consume more alcohol in an effort to gain relief.

Alcohol’s Effects in the Brain

In small amounts, alcohol produces stimulant-like effects which place a person in a happy, easy-going mood. In large amounts, alcohol acts as a depressant, slowing down chemical processes throughout the brain and body. According to the National Institute on Alcohol Abuse & Alcoholism, alcohol interacts with same brain chemical processes that contribute to the formation of mental illness. With chronic drinking, the brain’s chemical makeup starts to take on the same imbalances as those associated with psychological disorder. 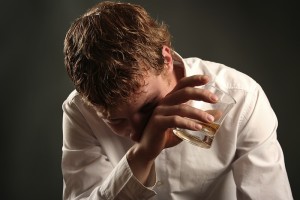 Some people use alcohol to cope with stress.

Someone who’s using alcohol to self-medicate symptoms of psychological disorder essentially uses alcohol’s effects as a means for coping with everyday stressors and pressures. Considering how the brain develops an increasing tolerance for alcohol’s effects, addiction can easily develop in the process.

Signs of self-medication typically take the form of:

Without needed alcohol addiction treatment, a person will become even more so dependent on alcohol to cope with daily life.

When to Consider Alcohol Addiction Treatment

Alcohol addiction drives a person to keep drinking in spite of the negative consequences that result. In this respect, addiction functions as a compulsive behavior that overtakes a person’s ability to control or manage.

Signs that a person should consider alcohol addiction treatment include: