This Troop of Monkeys Reveals a Possible Treatment for Alcoholism

Alcoholic monkeys? It’s true. But this troop of green vervet monkeys doesn’t choose the traditional banana for their afternoon snack. They’d rather have a cocktail, since they’re predisposed to finding and consuming alcohol.

And they may be the key to finding a new treatment for alcoholism in humans.

The Alcohol-Seeking Monkeys of St. Kitts 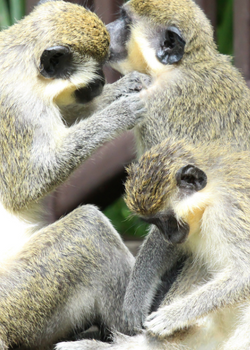 Are you familiar with the island of St. Kitts? This small Caribbean isle is known for beaches of gray, black, and white sands and beautiful rain-forested mountains. But that’s not what drew the attention of scientists.

St. Kitts is home to a unique colony of monkeys. Green vervet monkeys seek out and intentionally consume rotten and fermented alcoholic fruit that is intoxicating–just like human-made alcoholic beverages.

Scientists suspect this alcohol-seeking behavior is caused by a genetic trait or set of traits passed down through generations of green vervet monkeys. Dr. Kyle Flippo, neuroscientist and pharmacologist at the University of Iowa, explained:

Just as in humans, a certain percentage of monkeys exhibit an innate preference for alcohol.

Researchers decided to tap into this alcoholic tendency of the St. Kitts monkeys. The scientists wanted to test out a new hormone therapy to see if it might be an effective treatment for alcoholism in humans.

The researchers tested a compound equivalent to a specific liver hormone. The FGF21 analogue is the equivalent of the liver hormone fibroblast growth factor 21 created by Pfizer.

Developers at Pfizer had hoped to use the analogue to treat diabetes in humans. But, during clinical testing, it proved to be ineffective at reducing blood glucose levels.

But other research indicates that “mutations in the receptor for FGF21 have led to increased alcohol consumption in humans across many different ethnic groups and populations around the world.” So, maybe this Pfizer compound could be developed into a treatment for alcoholism instead?

Researchers turned to the alcohol-seeking monkeys to find out.

For the experiment, scientists gave a group of 20 male green vervet monkeys that had been observed to seek out alcohol ready and equal access to fermented fruit four hours per day for four days.

After the equal exposure, 10 monkeys were given a placebo and the other 10 were given the FGF21 analogue.

Researchers recorded the monkey’s alcohol consumption. Then, they stopped giving the monkeys the placebo and the hormone treatment. They allowed the monkeys to return to their previous habits.

The hormone compound didn’t turn the troop of monkeys into teetotalers. But researchers did find that the FGF21 analogue reduced the primates’ alcohol intake by 50 percent.

The group that received the hormone analogue no longer sought as much alcohol–they reduced their alcohol intake by half without any human interference. This preliminary result indicates that the hormone analogue successfully suppressed alcohol consumption in this small sample, which could be a huge breakthrough for treatment of human alcoholism.

Flippo noted, “Our results provide a mechanism for a liver-to-brain endocrine feedback loop that presumably functions to protect the liver from damage.”

A New Treatment for Alcoholism?

“Using hormones as a therapeutic approach to treat substance use disorders is relatively novel,” said Flippo. “But this is the first illustration that FGF21 analogues potentially reduce alcohol consumption in non-human primates, opening the door for a potentially new [treatment for alcoholism].”

Current treatment for alcohol use disorder–the clinical name for the symptoms and behaviors of alcoholism–involves behavioral intervention. Therapy and support groups are common approaches.

Three medications have also been approved for treatment:

While these medications have been available for a long time, medication-assisted therapy is considered under-utilized. Some researchers also consider current medications insufficient because they are less effective if not used alongside therapy.

A hormone-based treatment for alcoholism may offer an alternative method that helps those struggling with alcohol use disorder successfully make lifestyle changes.

“The central molecular and cellular effects of FGF21 represent an opportunity for future research, and the present data indicates that FGF21 analogues may provide a potential treatment option for alcohol-use disorder and related diagnoses,” Flippo .

We’re still a long way from a tested, proven hormone treatment. But this research might lead to a new option for people struggling with alcohol addiction. And since nearly 15 million people in the United States have an alcohol use disorder, this discovery could make a significant impact on a lot of lives.