Many substances can change your mood, especially by causing symptoms of depression.1 It is not uncommon for someone with alcohol use disorder to also have episodes of depressed mood. For some, their symptoms will be more intense and long lasting than what is typical or expected. These individuals may meet the criteria for alcohol-induced depressive disorder.

Approximately 0.26% of the United States adult population will develop a substance-induced depressive disorder.2

Your provider may diagnose you with alcohol-induced depressive disorder if you meet the following criteria:1

Most individuals experience symptoms during or within 1 month of substance use.1 If symptoms continue after a substantial length of time after abstaining from substances, you may not qualify for this diagnosis.1

Major depressive disorder includes a significant change in functioning and at least 1 of the 2 hallmark symptoms: a loss of pleasure or interest in activities or depressed mood most of the day. Mental health professionals evaluate if you have had at least 1 symptom for a minimum of 2 weeks.1

Major depressive disorder is also characterized by experiencing 5, or more, of the following symptoms nearly every day:1

These symptoms must cause significant distress or impairment in important areas of your life for a mental health professional to make a diagnosis. .1

Your provider will inquire about your history of symptoms and likely request collaborating information, whether from a loved one or a review of psychological and medical records. For some individuals, the use of substances can exacerbate existing symptoms, causing some difficulty determining the most appropriate diagnosis.1

Importantly, other depressive diagnoses may be considered if your depressive symptoms continue 4 weeks longer than expected based on the withdrawal timeline from alcohol.1

Studies indicate that major depressive disorder and alcohol use disorders often co-occur.3 A review of existing research suggests having one of these disorders doubles the chances of having the other.3 With this significant overlap, it can be challenging to diagnose accurately. 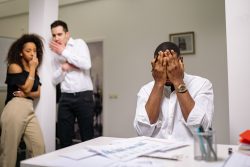 To assist in differentiating between diagnoses, the DSM-5 outlines the following common factors of a substance-induced disorder:1

Generally, the risk for developing a substance-induced mental health disorder increases with the frequency of use and quantity of the substance.1

A follow-up study found that individuals who met the criteria for a substance induced-depressive disorder were more likely to:4

It was also discovered that these individuals were more likely to meet the criteria for alcohol misuse and dysthymia (persistent depressive disorder).4

Regardless of the severity of symptoms, most symptoms are likely to improve quickly with maintained abstinence from the problematic substance.1 For most people, symptoms will resolve within one month of complete cessation and will no longer meet the criteria for the full mental health disorder.

A preliminary study found there are biological and clinical features that may assist physicians with distinguishing between alcohol-induced depressive disorder and other forms of depression.3 Researchers hope these results will lead to more effective therapeutic approaches.

If diagnosed with alcohol-induced depressive disorder, your symptoms will likely resolve approximately a month after complete cessation of alcohol use.1

If symptoms continue afterward, you may benefit from professional care. Treatment for co-occurring alcohol use disorders and depressive disorders can include:5

Preliminary research suggests that reducing the consumption of alcohol and general treatment of depression be beneficial.6 There appears to be some modest evidence to suggest antidepressant therapy for individuals with comorbid depressive disorder and alcohol use disorder can improve symptoms.6

Some studies suggest monitoring abstinence prior to treatment with antidepressants or similar medications. Evidence has shown the benefit of the combined treatment of antidepressants, including sertraline (Zoloft), and the alcohol dependency medication naltrexone (Vivitrol, Revia). This combination can improve both the dependency on alcohol and mood symptoms.6

Contact a treatment specialist at 800-839-1686Who Answers? to learn more about alcohol addiction treatment options.

Can I Attend AA and Another 12-Step Program at the Same Time?

How to Implement Meditation into Your AA Practice

How To Apply Alcoholics Anonymous Step 8 in REAL Life