Addiction is a cunning, ruthless disease. It’s one of the few illnesses that convinces you nothing is wrong.

Being in denial about addiction doesn’t stop at the individual level either.

Many parents, partners, and families never imagine their loved ones struggling with addiction, especially not at the rock bottom level. There are countless stories of family members and significant others describing their shock after discovering a loved one has a problem with drugs or alcohol.

That denial can have devastating consequences.

Saving a Marriage From Denial About Addition 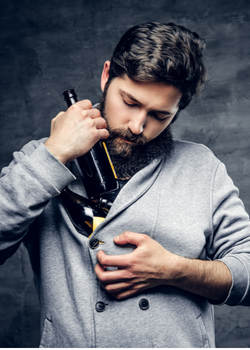 “I saw that my partner, Dave, was drinking a few beers during the week. But I also noticed the cans piling up in the recycling bin. I just never thought for a minute that he had a serious drinking problem.”

What Sarah didn’t know was that Dave had also been hiding his drinking. “I started to find bottles in weird places, like under the sink, or in the bottom of the garbage,” she says.

“Initially, I thought I’d put them there without thinking, maybe while tidying up the kitchen. But then I became aware of the strong smell of liquor on Dave’s breath. And then I started to put all the pieces together,” explained Sarah.

Even though Sarah recognized that her partner had a problem with alcohol, she still didn’t believe he needed to go to rehab.

“I confronted him, but he played it down. He said he’d had a few tough weeks at work, but he’d be able to cut back with no problem.”

Looking from the outside in, it’s easier to see this is a tell-tale sign of addiction. Dave rationalized and minimized his secretive behaviors and the amount of alcohol he was drinking.

Fortunately, Sarah spoke to a therapist who explained the signs of alcohol use disorder. Those include:

Sarah was able to encourage Dave to acknowledge these symptoms, confronting the fact that they were both in denial about addiction. Dave was screened for the behaviors and symptoms of alcoholism—called alcohol use disorder by mental health professionals—and was able to enter alcohol addiction treatment.

Parenting While in Denial About Addiction

Stan, Marsha’s teenage son, Stan regularly experimented with drugs and alcohol. He smoked marijuana after school, and he often drank at parties over the weekend. Marsha had suspicions, but ignored the signs she saw, staying in denial about addiction and other potential risks related to Stan’s behavior.

“I noticed the smell of smoke on his clothes, but I just thought he’d been at a friend’s house whose parents smoked,” said Marsha. “I never thought my son was anything like an addict. It didn’t even cross my mind.”

Over time, Stan came home later and later. And on the weekends, he might not come home for days. He ignored Marsha’s calls and was extremely defensive when she confronted him.

“I just never thought he’d stoop that low, you know? He was always such a good kid—that behavior seemed so out of character,” said Marsha.

On reflection, Marsha knows that all the signs were there—that she was in denial about addiction and substance use in her home.

“When I think back now, I realize I could also smell alcohol and pot on his breath. And on his clothes. I even found some rolling papers in his jeans while doing his laundry,” Marsha admitted.

While she brushed it off as a kid experimenting with drugs and alcohol, Marsha didn’t realize that something much more serious was happening.

“He came home from school one day—he seemed wired. I knew something was wrong, so I searched his bag.” she said. That’s when the reality of her denial hit her.

“I found a pipe that he’d been using to smoke meth. I was horrified. But I was also grateful because, when I found the rolling papers, it prompted me to do a little research. I looked at what kind of drug paraphernalia I should be on the lookout for, so I was able to identify what the pipe and foil were used for.”

While Marsha didn’t have professional guidance, she’d done some research and honed into her mothering instincts. She knew she had to get her son into a treatment center.

But after talking to an admissions counselor at the local treatment center, Marsha realized she may struggle getting Stan to engage in treatment. She knew it might be more effective to stage a professional intervention, especially because of his earlier defensiveness.

“Staging an intervention really took the pressure off me because I knew a specialist could manage the situation and that we could all share our thoughts and feelings without fear,” Marsha explained.

The interventionist was able to lead the conversation in a productive way that ultimately allowed Stan to face his problems. Fortunately, he chose treatment.

How Can You Know If You’re in Denial About Addiction?

In both Marsha and Sarah’s cases, they both stayed in denial about addiction for a long time until they couldn’t ignore it any longer. Recognizing your own denial can be as important as knowing the signs of substance misuse, intoxication, and addiction your loved one may display.

Your loved one may exhibit:

Ready to talk to a treatment specialist? Contact us today at 800-839-1686Who Answers? to learn about treatment programs for drug and alcohol addiction.