Do the Effects of a Hangover Get Worse As You Age?

Jeff didn’t remember feeling like this in college. He had hangovers back in his fraternity days, but not like this. In his 20s, Jeff had the usual headaches and nausea, but he was able to function (somewhat) as he recovered from a hangover. Not now.

Now Jeff is in his 40s, and even a small drinking binge leads to explosive headaches and extreme light sensitivity the following morning. He feels so bad he doesn’t get out of bed, much less deal with the responsibilities of work and family.

Effects of a Hangover (And Age): Older = Slower

A hangover happens when you drink more alcohol than your body can efficiently process. Your liver has to break down the alcohol, and it can only metabolize about one drink per hour. So, if you drink more than your liver can process, the toxin in alcohol called (acetaldehyde) goes into your bloodstream instead. The result: you feel awful the next day, i.e. you have a hangover.

And here’s the thing — as you get older, your liver can’t process the toxin as quickly or efficiently. Madelyn Fernstrom, Diet and Health Editor at NBC News, puts it like this: “It’s just like everything else about us as we get older. You can still do it, but you do it a little slower.”

What else is going on?

Experts say changes in your liver aren’t the only thing affecting hangovers. Another big factor is lifestyle changes.

First, many people drink less often when they’re older than they did in their younger years. So, you’re less used to it, and the lower tolerance results in tougher hangovers.

Then there’s also your perception of the hangover. Since they happen less often, it’s possible they just feel harder when you’re older, even though the symptoms are the same or similar.

Or, the symptoms might actually be worse due to medication you’re now taking as an older adult. These can interfere with how your body processes alcohol and can make you feel worse.

Or, you may simply have less energy than you used to, which makes the alcohol-related symptoms harder to manage.

Let’s take Mark as an example.

Mark used to drink heavily every Friday. When he was younger, he would hit the bar with his friends to kick off the weekend and never look back. Sure, he felt the effects of a hangover on Saturday morning, but he’d pop some Tylenol, throw on some sunglasses, and be on his way. Nothing was going to hold him back from enjoying the rest of the weekend.

Twenty years later, Mark’s response to a hangover is…different. He simply doesn’t have it in him to warrior through it. That level of vigor left him a decade ago. If hangover symptoms hit, he just wants to park himself in his recliner and do absolutely nothing until he feels normal again.

And lastly — what might be the biggest factor of all — there are the responsibilities of adulthood. These, combined with a hangover, can make even minor symptoms hard to handle.

Susan is a classic example. 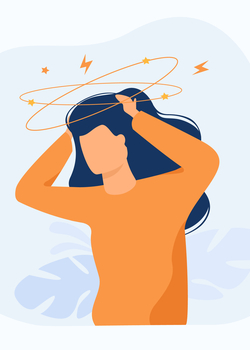 At age 22, Susan was finishing up college. She worked part-time and lived in a student dorm. Other than her classes, she had few responsibilities. After a night of heavy drinking, she often had a hangover the next day, but she usually powered through it and it hardly phased her.

Now, Susan is 39. She is married, with a 12-year-old daughter and an 8-year-old son. She works full-time and volunteers at her son’s school. She tries to make time for an occasional night out with her girlfriends. And when she does, she is very careful about limiting her alcohol intake — because she simply can’t handle hangovers anymore.

With so much to do every day, even slight nausea, fatigue, or dizziness can make her day impossible. Her son’s antics already keep her heart rate high and her ears humming. So if a hangover ratchets these symptoms up another notch, it puts her near breaking point.

Can you relate to their stories? Susan and Mark’s reactions are pretty typical. We get older. We slow down. We prioritize different things. We come to realize we can’t handle hangovers like we used to.

And that’s ok. In fact, if it helps us make healthier choices, that’s probably a good thing.