Home › Alcoholics Anonymous in the 1950’s

Alcoholics Anonymous in the 1950’s

According to Alcoholics Anonymous literature, it is important to learn the history of the movement to truly reap the benefits to the program. The long struggle to recognition that started with one man and a religious group in the 1930’s blossomed in the 1950’s. Alcoholics anonymous saw a great many changes in the 1950’s. What started as a small secular group expanded into a worldwide phenomena.

Most AA members and founders mark 1950 as the 15th anniversary of the AA movement. They celebrated with an international convention, the first of its kind. It was held in Cleveland and consisted of around 3,000 prominent members of the moment. During this convention an extremely significant event occurred. This event was the official adoption of the 12 Traditions that are still in use today.

During a general service convention, the ruling body of AA proved by open and frank discussion that AA could be ruled by a group conscience rather than a governing body could act as the authority for AA. 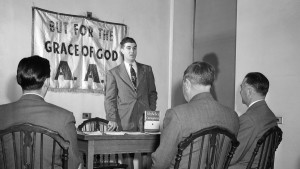 A.A. made great progress in the 1950’s, including being accepted as a form of treatment in hospitals.

The creation of the Al-Anon support group for families and friends of alcoholics was a huge step in teaching all others about recovery.

In the late 1940’s returning services men were of course welcomed into AA but it wasn’t until 1953 that they were officially welcomed into the program. Drug and alcohol abuse ran rampant in soldiers returning from WWII a phenomenon still felt after today’s conflicts. Also during this time, AA started a foothold in Germany around the same time.

The Saint Louis Convention served to solidify the existence of the AA group as a whole. Many of the principles and traditions were debated and reaffirmed during this time.

After a pioneer effort, the AA program became more widely accepted into hospitals and treatment programs. Previous to this clinical settings were leery of adding AA to their overall program lists. Many hospitals began to accept the 12 step philosophy as a legitimate form of treatment.

Since no organization can survive without a healthy influx of new members, the 1958 international conference was significant in bringing younger blood into the AA movement. By younger members they meant people under the age of 40.

Could AA Be Right for Me?

1959 marked further expansion into Europe for the AA movement, making It a truly international affair.

The 1950’s marked a period of steady growth in the AA movement. This growth although not complete pushed the AA movement into a worldwide program rather than just servicing a small number of people in North America.

Finding an alcoholics Anonymous group that suits you and your needs can be difficult considering there are so many with such a rich history. If you need help finding on or finding a center that also offers Alcoholics Anonymous inside their treatment centers, call us at 800-839-1686Who Answers?.