How Alcohol Affects Men and Women: Is There a Gender Divide?

The most recent National Survey on Drug Use and Health revealed 7% of American men have alcohol use disorder (AUD), while only 4% of women have AUD.1 The effects of alcoholism male vs. female adults, youth, and young adults in America are alarming. Whether the issue is alcohol and fertility, female alcoholics, or aging among males, alcohol has a negative impact.

Research on the differences of male vs. female alcoholics shows variances in the stages leading to alcohol use disorder, often involving social factors. Stages include acquisition, escalation, maintenance, withdrawal, and relapse. Men are more likely to engage in risky behaviors, especially if trying to fit in with peers. Women are more likely to misuse alcohol as a form of self-medication. Men experience greater symptoms of withdrawal than women, but they can also maintain abstinence longer.2

Social and cultural differences also exist. Below are some evidence-based findings from recent research on alcohol misuse:4

Alcoholism Male vs. Female and Metabolism

The process of metabolism begins the moment you consume alcohol. The enzyme responsible for this process is alcohol dehydrogenase (ADH). Males and females have different levels and ADH activity in the stomach and liver, which are the first two places alcohol travels. ADH processes some alcohol out of the system and sends the rest into the bloodstream.5

Men have much higher levels of ADH in the stomach and liver than female alcoholics. Some men can reduce the absorption of alcohol by up to 30%. Women have minimal amounts of ADH, causing them to absorb almost all the alcohol consumed. This means a male and female can consume the exact amount of alcohol, but women will have much higher amounts enter their bloodstreams, consequentially causing them to have higher blood alcohol concentrations.5

Women also typically have more body fat than men and less bodily water, which is how alcohol disperses to the body. This is another reason women become more impaired when drinking the same amount of alcohol as men.6

Due to differences in metabolism, women will experience the intoxicating effects at higher rates than men, even when they consume the same amount of alcohol. Males and females develop alcohol use disorders that produce very different long-term physical and psychological effects. 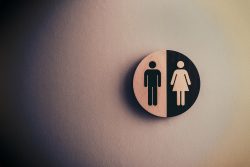 Alcohol causes severe damage to the liver in both men and women, although in different forms. Women tend to develop liver problems at higher rates than men. Examples of liver problems more common to women who misuse alcohol include:5

Men are more likely to die from chronic liver diseases than women, which correlates with men having more malignant liver tumors than women.5

Race is a factor that significantly impacts the age and severity of alcoholic liver diseases, such as alcoholic fatty liver, alcoholic hepatitis, and cirrhosis. A study comparing Hispanic, Caucasian, and African American patients with ALD shows Hispanic males get affected at much higher levels than the other races. Researchers explain co-morbid factors that may be responsible for the difference, including:9

Other key findings are that African Americans have more cases of Hepatitis C and were the group with the highest number of hospital admissions.9

Research indicates that women with alcohol use disorder are more likely to be affected psychologically than men. Researchers suggest the reasons alcohol misuse and psychological distress are higher in women may include:10

Breast cancer can occur in males and females. In the United States, up to 10% of breast cancer diagnoses are attributable to alcohol. However, alcohol produces gender-specific risks for women:12

Studies show that esophageal cancer, specifically squamous cell, is more prevalent in African American men living in the United States. Although documented U.S. studies are limited, risk factors have come to the forefront. Risk factors may include:13

Alcohol increases the chances of infertility in women. Here are several ways in which it affects fertility:14

Men’s fertility is affected by alcohol too due to the following reasons:14

Alcoholism male vs. female is increasing among older adults. Data suggests this is particularly true among older women over 60. As a person ages, tolerance for alcohol decreases, and it takes less of the substance to become intoxicated. This puts an older person at risk for more accidents and injuries.15

Alcohol affects men and women differently, even when seeking treatment. Gender barriers to treatment are found through multiple studies, such as women finding it more challenging to follow through with treatment due to finances and family obligations. Most studies show men utilize treatment services much more than women. There are many explanations, including:16

Today, alcohol use disorder treatment provides gender-specific programs at each level, from detox to inpatient rehab to outpatient counseling. Providers are also adapting online programs and services that make alcohol recovery a reality for many men and women. With the help of a treatment team, you can personalize a program to meet your lifestyle demands and preferences.

Where Can I Get Alcoholics Anonymous Information?

Can I Attend AA as an Inpatient?

Is AA for Life?